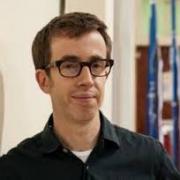 Aaron Landsman’s performances combine formal experimentation and long-term community engagement. His works are often staged in spaces where people go every day, such as homes, offices and meeting rooms. Projects include: City Council Meeting, a participatory work presented in four US cities in 2012-13; Appointment, a suite of performances for single viewers in small offices, presented so far in New York, Oslo and Detroit; and Running Away From The One With The Knife, a play about suicide and religious faith, to be presented at the Chocolate Factory in 2014. Previous work has been produced by The Foundry Theatre, PS 122, DiverseWorks and other spaces in the US and Europe. Landsman’s work is funded by the NEFA National Theater Pilot, Jerome Foundation, MAP Fund and NPN. He has performed with award-winning theater ensemble Elevator Repair Service and other artists, taught at Juilliard and NYU, and guest lectured widely.