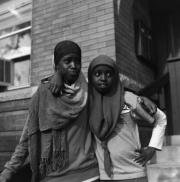 Inspired by unprecedented demographic urban changes, an expansion in the immigrant and refugee communities, and growth in high density urban living juxtaposed with the devastation of rising home foreclosures, in 2006 OverExposure undertook “What’s New,” a three-year documentary photography project. What’s New uses photography to engage, educate, and broaden views of the changes and challenges of neighborhoods in the Twin Cities With an interest in recording the changes and challenges each Twin Cities neighborhood currently faces, the first phase of the project, 10.10.10., began in 2007 with 10 photographers selected to work with 10 community partners. The second phase of the project 32 x 4 began in June 2008 and four photographers received grants to partner with eight organizations and document a total of 32 neighborhoods. 40 x 5, a collection of black and white and color photographs created by five photographers in 2009/2010 present 40 Twin Cities neighborhoods for the third and final installation of “What’s New?”