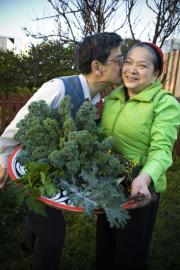 Victory Gardens is a gardening project initiated by artist and designer Amy Franceschini in the Fall of 2006. The project took its inspiration from the historic “war gardens,” but reinvented its concept to a contemporary context. Victory Gardens initially began as a proposal and has now become a project that supports the transition of backyard, front yard, window boxes, rooftops and unused land into food production areas. To achieve this, Franceschini partners with Garden for the Environment to develop and operate a citywide Victory Gardens program in collaboration with the City of San Francisco's Department for the Environment. Between January 2007 and September 2008 eighteen plots were planted, for which fifteen families representing the cultural, geographic and economic diversity of San Francisco were chosen. Through the distribution of starter kits, the project taught these families how to build a raised bed, planting, drip irrigation system installation, water- and time-saving timer set up, and one follow up harvest and seed saving lesson. Participation in the program includes a multi-year commitment to the pilot program. Once chosen, Victory Garden staff install and support each Victory Garden. Through public outreach and education programs, the project aims to create a community of urban food producers. The project is a response to, and solution for, the ecological crisis that urban residents face and the creation of more self reliant, ecologically just, and socially inclusive urban environments. Lead and key partner organizations involved include Futurefarmers, Garden for the Environment, and the City of San Francisco's Department for the Environment.